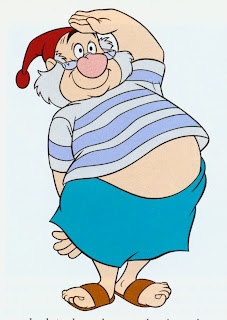 Luke and I do a lot of talking. Well, actually he ask questions and I try my best to give an answer that won't 1) be incorrect or 2) cause him to further question his questions. Sometimes there are only so many questions you can answer before you start to feel like your are being given an oral examination by a four year old. I start to get nervous and fumble my words; I'm really not good with a lot of questions.
Today, however, while we were riding in the car I was able to divert his questions into a sort of game about the movie Peter Pan. We decided to cast his family and Reid and me in different character roles from the movie. Luke was insistent on being the Crocodile, his dad would be Peter Pan, his mom Wendy, Emme would be Tink, and Reid would be Captain Hook. So, you can sort of see a pattern for how the roles were cast. His dad is the hero Peter, his mom is Peter's "girl" Wendy, Emme is small so she is Tinkerbell, and Reid is tall with dark hair and Luke wanted to be the Crocodile and chase him so he was Captain Hook.
You might be wondering why I didn't have a part? Why I wasn't Tiger Lily or even the dog, Nana. When I asked Luke who he thought I should be he said, without hesitating, Mr. Smee.
Mr. Smee, people! A short, fat, grey haired man!
I guess I have to just laugh. I think I'll think twice about playing the character game next time.