January 09, 2009
Since my parents wedding day they have lived together in a house on Rivercrest Drive. That changed Monday when my mom was moved into Presbyterian Village. I have had a vast array of emotions this week as I have tried to wrap my mind around what my dad must feel every night he goes to bed alone. I try to put myself in his place, even as much as I am hurting, but I can't imagine his loss. Twenty-five years of memories in a home, and you are forced to move your wife somewhere else for reasons you can't control. And, yet, his strength and dedication should be admired by every married man.
Mom had no trouble adjusting to life in the nursing home. It is almost as if she never knew anything changed. The lenient visiting hours have been so much better (on our family) at least. My dad is able to see her right before she goes to bed at night, and sees her at different times through the day. I think my mom has had more visitors than anyone else on her floor! She was always a social butterfly! My aunt has been able to fix her hair and put makeup on her, of course! She also has some cute new outfits I bought her before I left Little Rock and can wear jewelry in the nursing home. All of this helps her look more like the mom we knew at Thanksgiving.
A little over a week ago, when I was still in LR, we became concerned about my mom's vision. It became increasingly evident that she was not seeing in the way you and I do. She was no longer making eye contact, she became scared to walk (she would almost immediately try to sit down on the ground if we tried to get her to walk), and she didn't respond to movement in front of her face. Traditionally, with Alzheimer's patients, sensory organs can shut down and though they may function correctly, the brain can't interpret the input. In other words, there may be nothing wrong with her eyes, but they are not communicating correctly with her brain. A type of "blindness" sometimes common in Alzheimer's patients is called Motion Blindness: Visual perception is intact in other ways and a person with motion blindness is therefore able to perceive color and form, for example, as accurately as a normally sighted person. However, they are unable to see motion and instead are only able to gauge movement in frames rather than as a fluid process. In a particular example the subject's stroke caused lesions to the middle temporal area (area MT or V5) in both sides of the brain, just above the ear. This condition makes it difficult to do simple things such as cross the street, or pour a cup of coffee.[1] [2] It has been suggested that the ability to see motion is crucial for survival.[3] This condition has been associated with Alzheimer's disease. It is possible that Alzheimer's patients lose their bearings and become lost not due to a memory problem, but perhaps as a result of this condition. It may therefore be that a person's failing ability to detect motion accurately could give doctors a way to detect Alzheimer's disease in its earliest stages.[4] [5] [6]
I went to counseling this week. The biggest question on my mind lately has been, "So how am I supposed to live the next 3-6 months (or however long she may live) knowing my mom is going to die?" Do I start to mourn the loss now? Do I act like I have not been given a time limit? How in the world do you handle something like this? Her advice was to take it one day at a time. Asking God to teach me something new everyday, to learn to depend on Him for something different everyday, etc. I also need to focus on what I do know about God - His character, love, etc., rather than allowing myself to focus on what I might not understand about Him - why He allows people to suffer.
For momentary, light affliction is producing for us an eternal weight of glory far beyond all comparison, while we look not at the things which are seen, but at the things which are not seen; for the things which are seen are temporal, but the things which are not seen are eternal. 2 Corinthians 4: 17-18 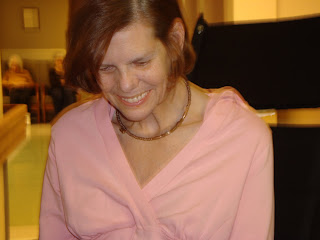