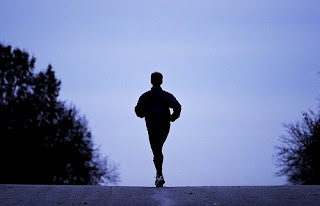 I thought I would give a little marathon update. About three weeks ago I stopped running after having chest pains and what felt like a skipped heart beat. I am embarrassed to admit that this had been happening for a while and it was only then that I got scared and told Reid. I went to the doctor this week, had a chest x-ray and EKG, which both came back great, and the results of my recent physical show no warning signs. That being said, my doctor wants me to be checked out and cleared by a cardiologist before continuing my marathon training. After a runner died last year during one of the big marathons (I don't remember which one) I don't want to take any chances.
Though I have not been diagnosed by a cardiologist, it makes sense that I have what many of my family members have (namely my mom and aunt). It is called Mitral Valve Prolapse (MVP) and I didn't even know both of them had it until I talked to my aunt about my appointment. I copied some info about MVP from the Mayo Clinic website. Please pray that this small manageable problem is all that is wrong! I go to the doctor on September 23.
What it is:
Mitral valve prolapse (MVP) is a common heart disorder. It occurs when the valve between your heart's left upper chamber (left atrium) and the left lower chamber (left ventricle) doesn't close properly. When the left ventricle contracts, the valve's leaflets bulge (prolapse) upward or back into the atrium. Mitral valve prolapse sometimes leads to blood leaking backward into the left atrium, a condition called mitral valve regurgitation.

Although mitral valve prolapse is a lifelong disorder, many people with this condition never have symptoms. When diagnosed, people may be surprised to learn that they have a heart abnormality.

Symptoms:
When signs and symptoms do occur with mitral valve prolapse, it's typically because blood is leaking backward through the valve (regurgitation). Symptoms can vary widely from one person to another. They tend to be mild, develop gradually and may include:

A racing or irregular heartbeat (arrhythmia)
Dizziness, lightheadedness
Difficulty breathing or shortness of breath, often when lying flat or during physical exertion
Fatigue
Chest pain that's not associated with a heart attack or coronary artery disease
Prevention:
You can't prevent mitral valve prolapse. However, you can lower your chances of developing the complications associated with it by making sure you take your medications, if any, as directed. Also, remember to let your doctor or dentist know you have mitral valve prolapse so that they can evaluate whether you need antibiotics to help prevent infections of your heart valve.