Emme and the Taco Bell Man 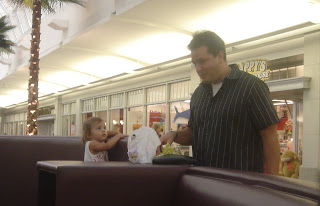 On Friday we were playing at the Galleria. We had finished lunch only minutes earlier, but Emerson was intrigued by a man standing by the play area watching his kids while eating his Taco Bell lunch. She was so interested that she crawled up onto the bench next to him to check it out and stayed there until I made her leave him alone. I am pretty sure she has never even tasted Taco Bell, but the way she was staring you would have thought it was her favorite food in the whole world. It was hilarious!