Bathroom Re-do Before & After

September 26, 2011
When Reid and I bought our house almost two years ago there was only one thing I REALLY wanted to change. The 1970's fabric covered walls in the half bath. My only fear was the the people who we bought the house from had redone every other room and not touched that one. I couldn't help but wonder if that fabric was hiding something I'd prefer to keep hidden. And, Reid wasn't too enthused about finding out what was under there. Although, I think secretly he adored the novelty of that little room.
Fast forward to the beginning of September. On a Tuesday night I called Reid and asked if I could take down the fabric and paint the bathroom. I told him I'd have it done by the time he was home Thursday and was prepared to tackle whatever I was going to find. He said YES and the rest is history that will hopefully never repeat itself. ;)
I kept thinking how hard can it really be? Remove fabric, prime, texture the walls to match the rest of the house, and paint.
By the second day of my project I realized how involved it was going to be and called for a quote to have it finished by a contractor. The amount of that quote was all the motivation I needed. Reid came home Thursday to an unfinished bathroom and wasn't mad at all. In fact, he was so excited that I had figured out how to do it on my own that he bought a few new tools to make it easier. And, he let me pick out a new sink fixture (which he kindly installed). His love language is "acts of service" and mine is "gifts" so our love tanks were running high! Ha!
For my memory, here's a brief run-down on the specifics:
10 days (total project length, not days worked)
1,000 staples.
Countless new tools and an electric sander.
14 trips to Lowe's and Home Depot.
One identity theft alert from the CC company after 6 trips to hardware store in one day.
4 tubs of wall spackle/texture
3 days at doggie daycare for Samson.
2 cans of paint.
And, one nasty blister.
But, it was totally worth the end result! 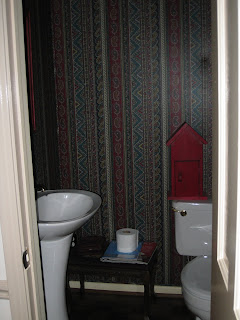 (This pic was taken before we moved in. I would never put a table next to a toilet.) 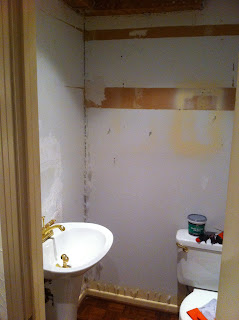 This was day 2. Notice all the cotton batting stuck to the staples? And random exposed wood?) 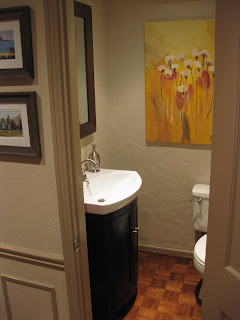 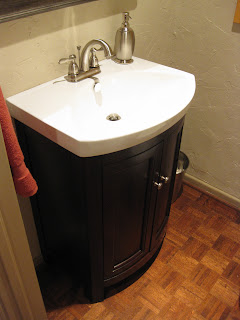